Welcome to 10 Questions With, a blog series where we get to know members of the Xamarin community a little bit better.

In this installment of the 10 Questions With blog series is Senior Content Producer at Microsoft, Glenn Stephens. So without further ado, let's get to it! 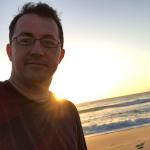 1) What's the first thing you do when you start working in the morning?

2) What superpower do you wish you had?

Super speed. I’ve got a lot of slow-twitch fibres. Lots of endurance, not enough speed

3) What's one thing that you do when developing software that you know you shouldn't?

Probably over engineering a little. My friend Peter who made Trumpet Winsock told me once that its often when you change something at the fundamental level that you are able to do things truly differently. I liked this and take this approach and while things go a little slower especially at the start, you normally end up being able to create things that are unique and sometimes revolutionary

4) What makes you happy?

Spending time with friends and family, endulging my hobbies such as snowboarding, music and other interests too numerous to mention

My brother taught me some BASIC when I was around 12 (1985) and I took to it. I would write small games and apps. It was like a way of making most things I wanted and I was fascinated with it for a while. I spent a lot of time on C=64 and C=16 machines in my youth

6) Where in the world would you most like to live?

I was born and live in Australia which is wonderful, but if I am torn between Canada (either Vancouver or Calgary) because of some of the great things that are there such as Snowboarding, Tim Horton’s and many other reasons. I’d also consider Clermont-Ferrand in France as I went to a conference about 6 years ago and it felt the most peaceful place I had ever been even though my French is terrible.

7) If you weren't in software, what would you be doing?

Most likely I’d be a professional musician. I had a piano bar residency for a number of years even while working in software years ago.

8) What's the most overrated software skill?

I find questions like this tricky especially when I see articles like “What makes a effective developer?”. I think an effective developer is context driven and should match the industry they work in. I have seen terrible coders make brilliant pieces of software that created lasting businesses because they had patience, listened to the customers in the industry that they are in and had persistence and grit. All of that had very little to do with their code skills. I’ve also seen great coders struggle because their skill sets don’t match what is really needed for what they are working on and in the classic case of someone with a hammer, everything looks like a nail. Overrated software skills may not be the problem, a lack of context, a lack of soft-skills or a lack of understanding what really drives an organisation such as profit, sustainability or public good is what is missing to make someone truly effective.

9) What music do you listen to while you're coding?

Bonus! Where can people find you?