Welcome to 10 Questions With, a blog series where we get to know members of the Xamarin community a little bit better.

In the second installment of 10 Questions With blog series is the Senior Program Manager at Xamarin University, Rob Gibbens. So without further ado, let's get to it! 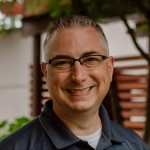 1) What's the first thing you do in the morning?

2) What superpower do you wish you had?

The ability to learn instantly, like jacking into the Matrix.

3) What's one thing that you do when developing software that you know you shouldn't?

I just start throwing code everywhere to get something to work, and tell myself that I'll fix it later. I DO fix it later, but I feel guilty about it.

4) What makes you happy?

My wife and kids.

It was 1993, and my coworker showed me the Mosaic web browser, which had just been released. I started teaching myself HTML. Granted, back then there were only about 12 tags to learn.

6) Where in the world would you most like to live?

I love Michigan, the state I live in now. Probably somewhere around Traverse City, Michigan.

7) If you weren't in software, what would you be doing?

I literally have no idea. Whatever it would be, I wouldn't be as happy as I am now.

8) What's the most overrated software skill?

Multitasking. It always SEEMS like a good idea, but it never works out. I'm terribly guilty of it though.

9) What music do you listen to while you're coding?

Nothing. What a motto with you? :D

Bonus! What's next for you?

I'm completely focused on helping to teach the Xamarin community to make great apps and spreading the word about Xamarin is so cool.

Bonus 2! Where can people find you?